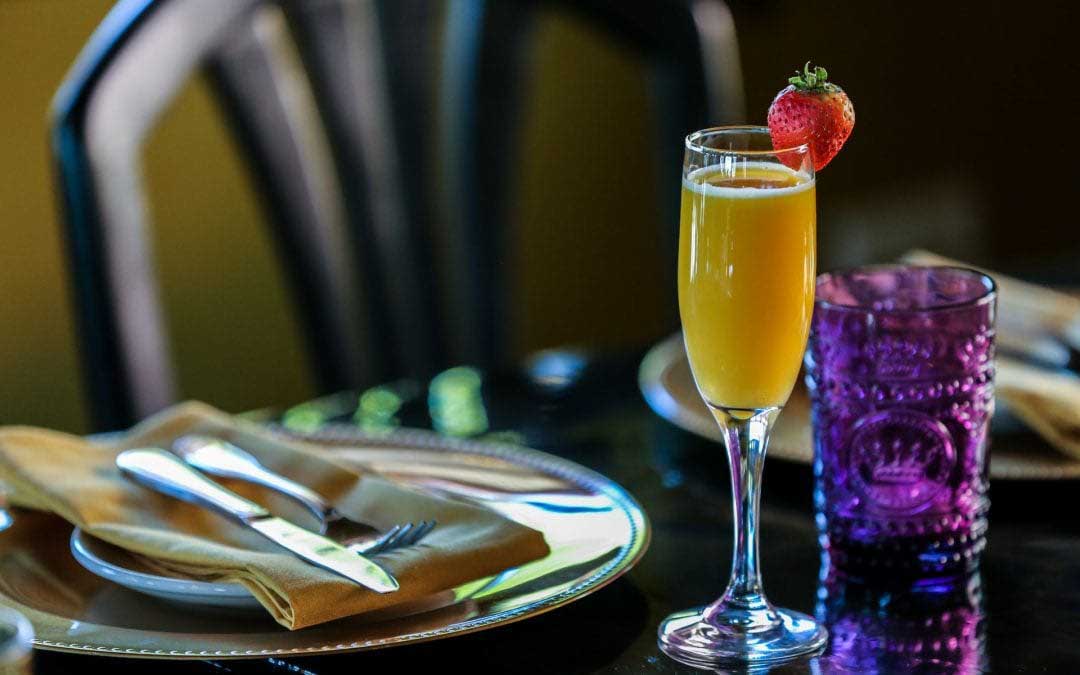 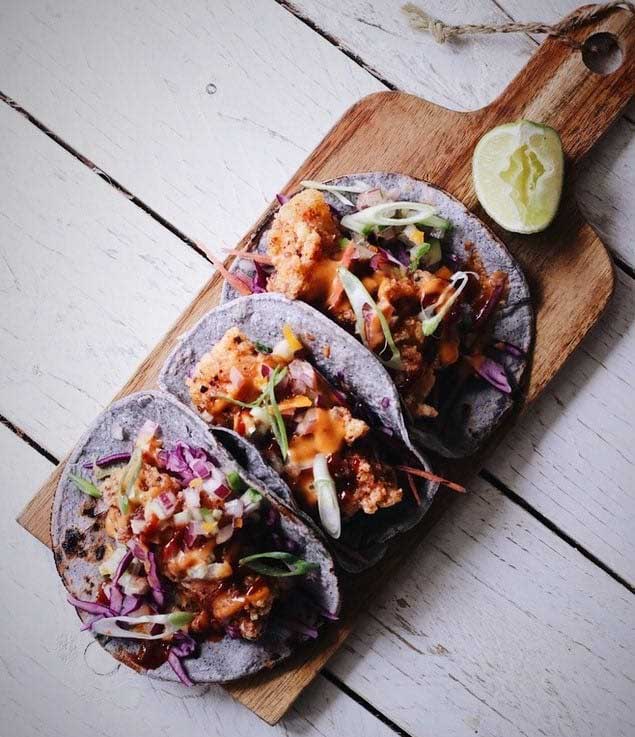 Today, I cried at the nearby mercado here in Oaxaca, Mexico, when I tasted the blue-corn tortillas with huevos con rajas verdes. I’m no foodie and have only missed corn tortillas in Portugal.

But the food here is sublime — the mamey, the atole, the nopales con salsa de tomate, the gelatinas, los dulces and nieves. I eat like a rich person — whole grain, organic, packed with herbs and spices. Epazote. Oja de aguacate. I hallucinate. Dozens of salsas and chiles.

And today, I broke down sobbing as I poured the huevos onto my homemade tortillas. Abuelita raised me on corn tortillas, cafe con leche, guisaditos with very little meat. Pan dulce. 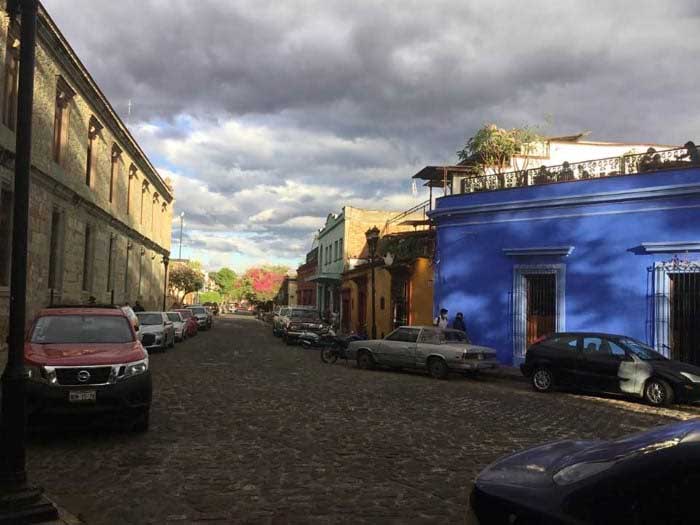 For a moment, I am six years old, back home in the Panhandle of Texas, middle of nowhere, and it’s 4:00 pm, and my abuelita has gorditas for me — not fried — comal only, filled with black beans and queso fresco she’s smuggled into Texas. It is 1960. I smell corn, freshly ironed linens. Hear Mami’s rancheras, the click of her scissors. . . . She’s making me new panties with lace, quinceañera dolls to sell too, this time in lavender. The newest baby babbles in his crib. 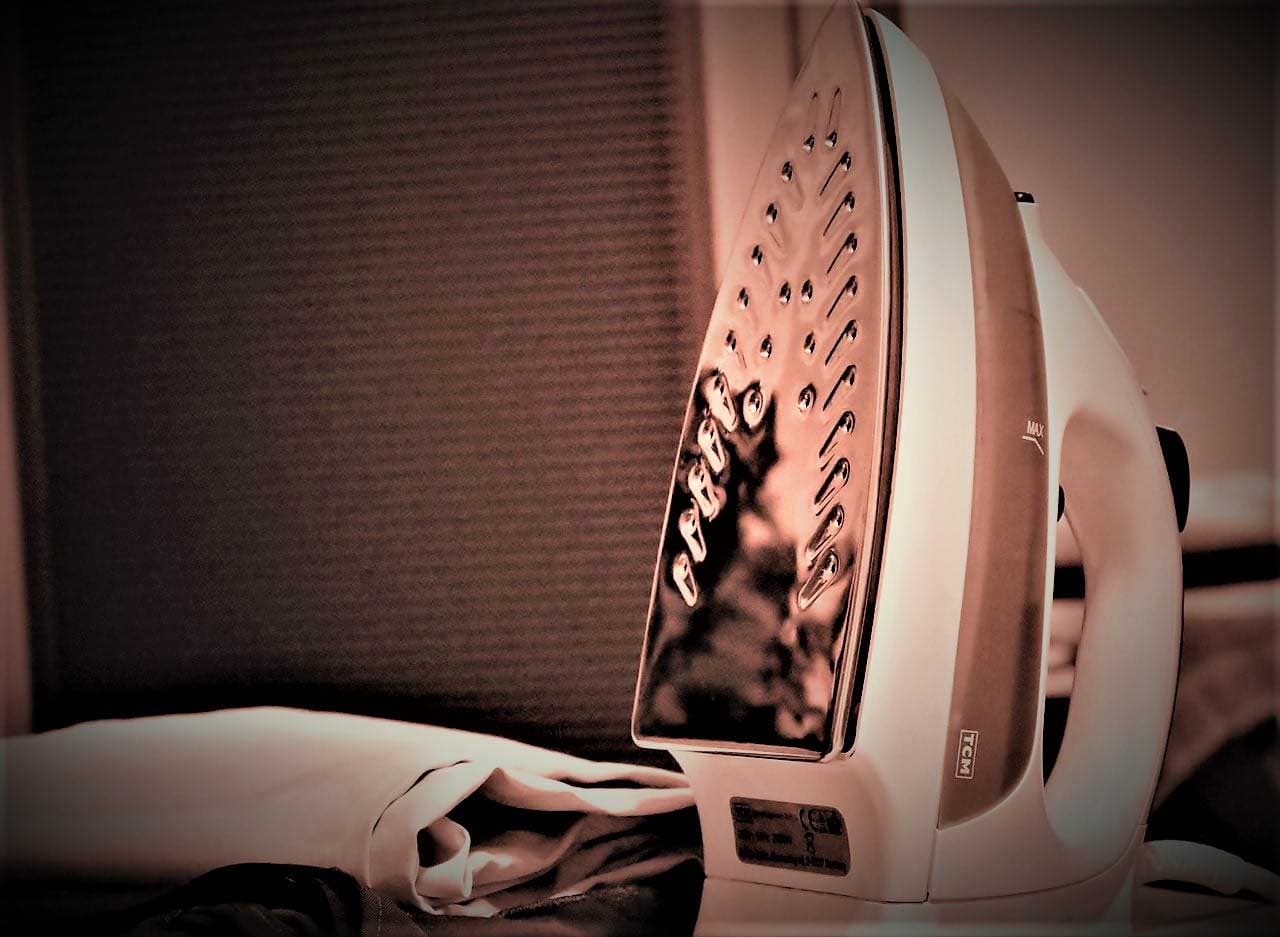 My white classmates have harrassed and called me names all day. Circled me. Another long day. And I am home now.

Everything will be OK, I tell that little girl. You have all this.

You have inherited this five-star meal. 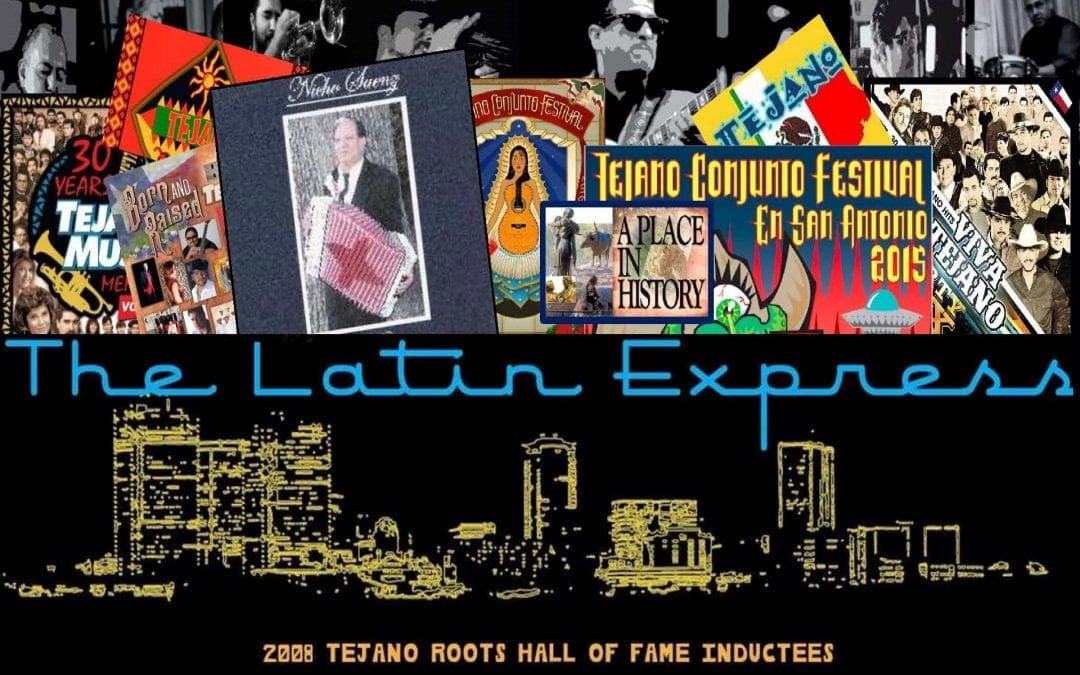 Nine-year-old Lionicio Rodriguez Saenz played the harmonica and accordion alongside his guitar-playing, ten-year-old cousin Romaldo Pérez for farm workers after a grueling day of harvesting beets in Minnesota fields. Realizing their migrant-worker treks prevented their only child from attending school, Sanez’s parents bought him the instruments to infuse musical grace in their hardscrabble lives. Self-taught and musically gifted, Saenz mastered the mouth harp and squeeze box in a migrant-worker world without daily radio, movies, or telephones. Campesino families gathered as the two boys sang Mexican songs and corridos of love, adventure, and beauty. To preserve their voices and strength, the farmers allowed them to act as water boys during the day and entertainers at night. 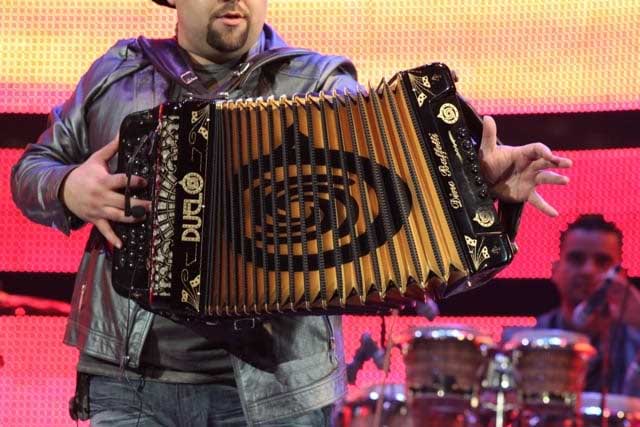 Born in Escobares, Texas, 1933, along the Río Grande River, Saenz accompanied his family in the annual migrant trips like thousands of campesinos who harvested America’s fruits and vegetables. The Saenz family had lived along the river for several generations, knowing they never crossed the border, the border had crossed them. At seventeen in 1949, Saenz convinced his family to allow him to stay with an aunt in Fort Worth, Texas’ Diamond Hill barrio while they proceeded north to the farm fields. They planned for him to reunite later, but in truth, young Saenz wearied of the work, seeking escape in the city.

Working at odd jobs during the day, Saenz noticed a glaring absence of Tejano music bands in Fort Worth. Aware that urban Tejanos worked as hard as farm workers at Swift Armour Meat Packing Plant, Texas and Pacific Railway, Texas Steel and other manual labor jobs, he entertained them with his new troupe, Nicho Saenz y Los Alegres de Norte. As the lead singer, Saenz played lively Tejano tunes with his accordion at church jamaicas (fairs) and parties throughout Fort Worth. Highly territorial, barrio boys normally didn’t tolerate young Chicanos coming to their neighborhoods looking for girls or trouble. For Saenz and his crew, their music calmed hostile glares at the first waves of lively Tejano polka tunes.

His wife Rosa Maria Garcia whom he had met at a jamaica convinced him to find a steady construction job. Late to work one day after missing his ride, he startled at his boss’s astonished gaze. Saenz learned five members of his pipe-laying crew had died in a cave-in earlier that morning. At his wife’s insistence, he left the construction job and worked as clean up man at Acme Tent and Awning Company where he met T. D. Wynn. A US Navy veteran, the African American canvas sewer helped Saenz to improve his English and taught him to control his temper when harassed with racist slurs freely shot at Blacks and Latinos. 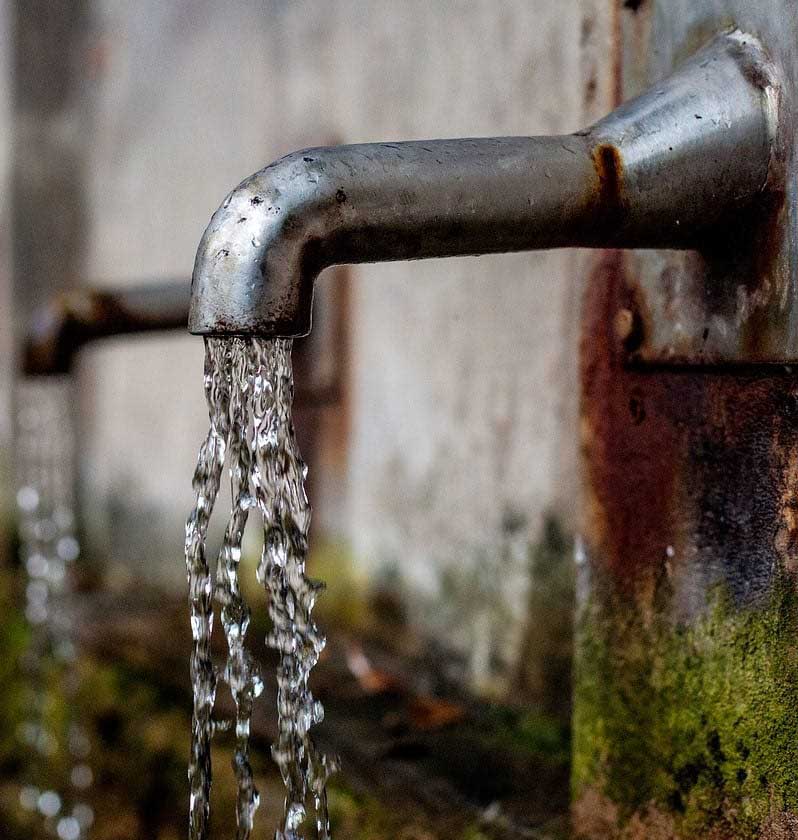 In 1950s Fort Worth, overt White ridicule of non-whites was normal parlance for police to paupers. Segregated water fountains and bathrooms, separate public bus seating, and “No Blacks, Mexicans, or Dogs Allowed” store and restaurant signs proclaimed the racial order in the Lone Star State. Wynn related that Black sailors were relegated to cooks and custodians and were never permitted on deck to shoot the big guns. The navy assumed that Blacks’ night vision was too poor to hit anything. In face of racial hostility, Wynn reminded him it was more important to earn a living and to survive for their families in a culture glorifying church steeples and white sheets. Not all Whites walked the crooked path

Nicknamed “Shorty” for his five feet one inch stature by fellow workers, Saenz soon rose to head tent repairer and caught the eye of Rex Palmer, director of the Boy Scouts of America Dallas/Fort Worth region. Dissatisfied with Acme’s response to his tent repair needs, Palmer offered to help set up Saenz in the tent and awning business if he agreed to give the Scouts’ tents top priority. Taking on Wynn as a partner, Saenz opened their business, S & W Tent Canvas Products, at 212 W. Exchange Street in Niles City as the Fort Worth Stockyards Area was then called in 1956. Niles City at the time had a seedy reputation for drunks, prostitutes, and drugs. Saenz continued to work part-time at Acme until they fired him after discovering his new business venture and loss of the Boy Scouts account. Saenz boasted to his family that he was one of the few local Latino entrepreneurs who had a business not in food or construction industries.

An uncomfortable first in Niles City was the presence of a minority-owned business. Carlos Saenz, Nicho’s eldest son, recalled as a ten-year-old in 1960s helping at the store and hearing racial slurs, including the N-word, that White customers hurled at Wynn and his father. For example, an angry trucker howled, “Where’s that stupid spic? He was supposed to have my tarp ready.” Wynn explained that Saenz was picking up the supplies. “You tell that that damn wetback I better have them . . . A nigger and a stupid Mexican opening a business in the Stockyards. That beats all.” When Carlos asked his father why they tolerated the abuse, his father relayed Wynn’s advicete. “Let them talk all they want. They’re still spending their money.”

In his 20s, Carlos acted as the company’s salesman, driving a Cadillac, wearing a suit, clutching a brief case to prospective customers’ homes in response to quote inquiries. When some White prospects opened the door, he met disappointing glares when they realized the company was minority-owned. It was Wynn’s idea to use initials in their business’s name lest Spanish sounds elicit automatic rejection.

Spanish paid off in Sanez’s musical gigs. Known as Shorty during the day, he transformed into Nicho, Tejano band leader, at night. Carlos joined his father as a drummer at twelve years old as they played Tejano tough beer joints on north Main Streets such as the Blue Moon Lounge, Escondido, and Connie’s, and dance halls known as the Rocket, the Casino, Guys and Dolls, and Tango. The bars often lacked security and bath rooms, resulting in fist fights, shootings, and pisses in the alley.

Carlos recalled at thirteen-years old driving the band home, members too drunk to steer. The accompanying 1968 photo shows Los Alegres at a New Year’s Party they performed in Dallas, Texas, at the Bridgeport Ballroom. As the band prospered, so did Saenz’s canvas business.

Although Saenz’s net worth exceeded over $3 million in the 2000s, he continued to operate the business because his employees depended on the steady earnings for their families. After his wife Rosa died in 2013, Saenz closed his canvas operations in 2015, but not his accordion case. He often played with sons Carlos and Lionicio G. in their band The Latin Express.

In 2007, the Tejano Roots Hall of Fame inducted Nicho Saenz into their Millionaire Band. The Latin Express was inducted in 2008. He last played publically in 2016 with The Latin Express at Casa Mañana, a theater in the round, in a benefit concert for the Fort Worth School District Fine Arts Department. Saenz enjoyed performing on stage, singing, fingers flying, watching jubilant faces like in his youth when he crooned Mexican corridos for farm workers by camp fire lights.

At his wake at Greenwood Cemetery Fort Worth, his sons and The Latin Express played to “standing room only” Latino mourners, swaying and singing to the tunes of Nicho Saenz y Los Alegres de Norte. Lionicio Rodríguez Saenz died on July 16, 2016, leaving cool shades and mellow sounds to anyone with the heart to hear. 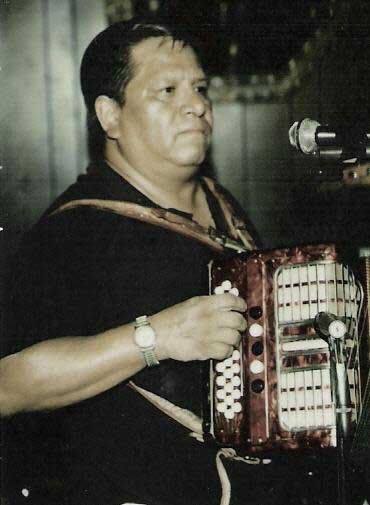